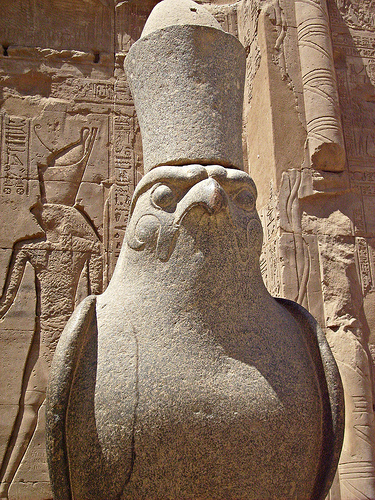 John Taylor ( no relation ) writes that the Ancient Egyptians ‘more than perhaps any other society, directed a vast amount of their material culture to counteracting death’.  Their literature on death and immortality is ‘the oldest comprehensive expression of human thought about the survival of the individual’.  ‘The Egyptian Book of the Dead’ (originally known as ‘The Spells for Coming Forth by Day’) includes several chapters of recitations designed to help the ba-soul transmigrate into bird form, so that the deceased could ‘go forth by day’ into the sunlit world.  Since this rejuvenation depended upon souls being accepted by the Sun God, many hymns invoke the rising Sun in Falcon form.

One of the Coffin Texts describes his birth.  Isis, whose lineage has been traced back to neolithic Bird Goddess figures, dreams that she is going to give birth to a son who will redeem the patrimony of Atum, and restore the rightful order of the world.  Having secured the protection of the gods, she prepares to give birth.  She then realises that the baby inside her body is a Falcon.  When Horus emerges he immediately flies up and takes control of his destiny.  ‘”Even the most ancient bird could not equal my first flight … no other God could do what I have done.  I have brought the ways of eternity to the twilight of morning.  I am unique in my flight”.  Isis, portrayed as an ornithomorphic female figure, shelters her son, her husband, kings, and their subjects, beneath huge outstretched wings.

Because my connection with birds was forged around and during the mysterious hiatus of bereavement, these archaic stories have considerable appeal.  ( see the-common-kingfisher and birds, liminality, and transformation ).  As an animist, however, my starting place is the living world around me.  I am interested in how the stories we tell reflect and shape relationships between human communities and their other-than-human-neighbours, here and now.

Peregrine Falcons returned to our part of the Pennines in the mid 1990’s, thanks to the concerted efforts of birders and conservationists who protected eyries against (ongoing) persecution.  The history of the species is well known.  Renowned conservationist Derek Ratcliffe led the first national survey of Peregrines in Britain and Ireland in 1961.  He found that their population was crashing, and discovered that DDT was implicated.  His meticulous scientific advocacy – measuring egg shells and taking on corporate vested interests – eventually led to the banning of DDT by the European Union.  Ratcliffe was clearly motivated by a lifetime passion for the bird.  His monograph on the species ends with a resounding call to action: ‘”Those to whom the Peregrine is a source of inspiration and wonder have a special duty of vigilance …  It is their responsibility to ensure that it survives, not just for its scientific, aesthetic, and other value, but in its own right as one of the most spectacular inhabitants of our planet”. 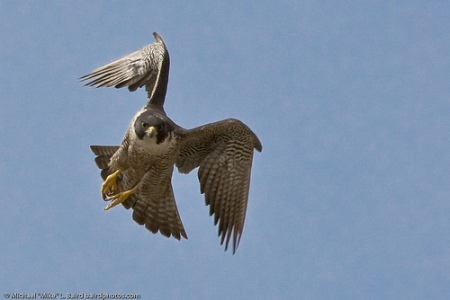 The plight of Peregrines in the early 1960’s galvanised another hugely influential but very different storyteller.  J.A. Baker’s The Peregrine is justifiably revered.  It’s an extraordinary paean to a particular landscape as well as a particular bird.  Baker writes ‘my pagan head shall sink into the land and there be purified’.  The original meaning of ‘pagan’ was simply an inhabitant of a particular place, someone who knew an area, and worshiped at its local ancestral sites.  Baker talks about the qualities of directions, and of time – ‘the cold depths at the feet of the solstice’, and and describes moments of exhilaration in spiritual terms – ‘when the hawk is found, all is transfigured, as though the broken columns of a ruined temple had suddenly resumed their ancient splendour’.  He becomes ‘possessed’ by the Peregrine as an icon of the wild.  At one point the bird’s mastery of its element makes him ‘shout aloud and dance up and down with excitement’.  Mostly, however, he adheres to a rigorous routine designed to banish ‘the human taint’ and dispel the bird’s natural fear.  His descriptions of both the Peregrine’s unique powers of flight, and the phenomenology of communion are, I think, unparalleled.  ‘I shut my eyes and tried to crystallise my will into the light drenched prism of the hawk’s mind … I sank into the skin and blood and bones of the hawk’.

In his prologue to the 2005 edition Robert MacFarlane refers to John Keats’s doctrine of ‘negative capability’, “the ‘poetical’ capacity to empty yourself so totally into another being that you do not merely think like that being but are that being.”  Elsewhere he talks about the intensity of Baker’s language transforming the act of bird watching into something akin to shamanism.  But surely it was the intensity of Baker’s practice that forged the breathtaking luminosity of his prose?  His spell-binding poetic descriptions circumvent the rational mind, transporting the reader into a dream-like reverie, whilst somehow transmitting accurate evocations of wild nature.  Or do they?  There has been much debate about the veracity of The Peregrine.  Mark Cocker acknowledges some possible problems, but concludes that although John Baker fictionalised personal experience, he had ‘an almost forensic concern for truthfulness about his encounters.’

It scarcely seems to matter that the bird he established a rapport with might have been an escaped falconry bird, perhaps a Saker Falcon, or a cross, rather than a Peregrine.  What happened still astonishes, and enables Baker to initiate a discussion of intimacy between humans and other species in the wild.  His animism arguably accounts for the strength of his appeal to many Naturalists.

It may seem churlish to mention reservations about such a wonderful book, but there are some clunky bits, such as the anachronistic references to ‘primitive man’.  This is clearly an image of an empathetic indigenous hunter, but the sociologist in me wants to get back on his soapbox and complain about Baker’s fixation with hunting.  Nowadays we might wonder where all this ‘Man the Hunter’ stuff leaves Man the Nurse, Man the Father, Man the Dancer, and so forth.  More to the point, I’d rather celebrate John Baker as Man the Poet, Man the Conservationist, or Man the Animist.  The Peregrine suffers a related limitation imposed by the accident of geography, or by Baker’s lack of interest in overcoming it.  His local landscape only held over-wintering Falcons, so, sadly, he gives us no descriptions of the domestic aspect of the life of the species.

J.A.Baker’s writing has been compared to the poetry of Ted Hughes.  Both have been likened to shamans.  Baker was obsessed with the hunt, Hughes was an avid angler.  Both were deeply concerned about ecological issues, and human alienation from the natural world.  The protagonist of Hughes’ most intensely shamanic/alchemical poetic sequence Cave Birds, – the soul of Socrates – is accused of a crime (the murder of the Goddess) and undergoes various trials in the underworld, including decomposition, reassembly, and marriage with his female counterpart, before emerging transfigured in Falcon form – as Horus, ‘child and spouse of the Goddess’.  For Anne Skea the Falcon is ‘the ‘liberated’ spiritual gold, the protagonist’s diamond body.  Neil Roberts celebrates the Risen as ‘one of Hughes’ finest expressions of his sense of nature as both immanent and transcendent’.

Anne Baring and Jules Cashford, The Myth of the Goddess, Evolution of an Image, London, Arkana 1991.

Robert Macfarlane, Introduction, to The Peregrine, New York Review of B00ks, 2005.  Some what Macfarlane had been told, or surmised, later proved to be untrue. (pers comm, 2010).  See also: