“And did the countenance Divine / Shine upon these clouded hills / And was Jerusalem builded here / Amongst these dark satanic mills?” William Blake (sung by Chris Wood, to his own tune, as I write).

In 1970, with Crow about to be published, Ted Hughes encouraged the photographer Fay Godwin to make some images of the Calder Valley in West Yorkshire.  He wanted to write about the place where he’d spent the first six years of his life, and where his family lived, and needed some ‘visual triggers’.  Six years later, when he next got in touch, she had been diagnosed with ‘terminal’ cancer.  Hughes was ‘totally generous and supportive’.  He told her to ‘turn the current positive’, and get on with the book.  They worked together on it through 1977.  She appreciated the reciprocal nature of their collaboration.  Both were determined not to illustrate each other’s work.(1)  In an interview Fay Godwin once said ‘the land is a living, breathing, thing, and light changes its character every second of every day.  That’s why I love it so much’.  No wonder they got on.  She survived the cancer and lived until 2005, so perhaps the first thing to say about Remains of Elmet is that some healing intent worked on a personal level.

According to Ann Skea, most critics felt that Remains was an impressive evocation of ‘the bleak, rugged and haunting beauty of the Calder Valley’, but they overlooked its ‘transforming alchemical purpose’.(2) John Billingsley suggests that Remains can be read as a ritual of renewal for the land.(3)  Terry Gifford feels that the Elmet books may have contributed in a small way to the ‘cultural reconstruction of nature and the natural in the Upper Calder Valley’.  Were these poems, then, also an effective contribution towards a collective healing of the cultural and ecological scars of the industrial revolution?  The following notes address these possibilities from various angles, not least by flagging up a range of other accounts of the valley’s historical past, and its twenty first century present.

When Remains of Elmet  was published in 1979 I was working in a co-operative bookshop in Todmorden.  Ted Hughes’ poems and Fay Godwin’s equally memorable monochrome photographs sparked a lot of interest, so we sold piles of copies.  I always felt ambivalent about the book though, to the point of wanting to reply, or at least add some afterthoughts.  This then, is my belated response, not just to Remains of Elmet (and the much revised Elmet), but to critics and biographers who make various claims on the basis of Ted Hughes’ writings.

Having lived in the landscape framed by Fay Godwin’s photographs for the last forty years, I’ve quite often found myself wincing at their descriptions of the Calder valley.  In a highly regarded biography, for example, Diane Middlebrook describes the Valley as ‘a deep gorge running through the Pennine mountains’ (a steep sided valley in the Pennine hills would be closer), locates Mytholmroyd on a river mouth (despite an obscure etymological suggestion, its not), and repeats Hughes’ boyhood exaggeration of Scout Rock, writing that his childhood home ‘stood in the shadow of an enormous cliff’.  In similar vein, an introduction to a set of recordings of Great Poets of the 20th Century, has him ‘born in a Yorkshire coal mining town’.  These are not isolated instances. (see footnote 1).

Simon Armitage observes that ‘the anthropology, religion, natural history, and geography of the area’ provided Ted Hughes with ‘a model for nearly all of his future work’.(4)  Hughes himself referred to the Calder valley as his ‘tuning fork’.  Given that, at its best, Ted Hughes’ poetry offers a transformative vision of the relationship between human culture and Nature, and that he rooted this vision in acute observation, not least of the particularities of place, anyone attempting to evaluate his portrayal of the valley surely needs to engage with some ‘anthropology, religion, natural history, and geography’?

Trees reclaim the site of a water mill in  the Upper Calder Valley.

In Dead Farms, Dead Leaves: Culture as Nature in Remains of Elmet and Elmet, Terry Gifford argues that Ted Hughes’ poetry represents a post-pastoral ‘shift from nature as culture to culture as nature’.  Nature as culture refers to a tendency, fostered by post-structuralism, to treat nature as culturally constructed in language, and either to overlook material realities, or assume that the natural world is now permeated by anthropogenic influence.  Gifford coined the term ‘post-pastoral’ as a way of characterising poetry that ‘listens deeply’ and ‘keeps faith with the source’ -a creative-destructive universe- whilst avoiding both pastoral idealisation and simple anti-pastoral reaction.  Remains of Elmet epitomises this perspective by recognising human culture (in this area, hill farming and the industrial revolution) as an integral part of the creative-destructive cycles of nature.   Ted Hughes grounds his ‘spirituality’ in the fabric of lived experience, and writes as though the non-human world is suffused with agency: nettles venom, chimneys flower, grass agrees, stones tremble, rock sings, light leans, heather thickens nectar, wind interrogates, a snipe draws the new Moon down into her eggs.

I find some of the poems hair-raisingly evocative, some sublime, and some very moving.  They set the bench mark extremely high for any neophyte wanting to evoke my local landscape.  Ted Hughes is, by far, my favourite poet, but in my view his portrayal of Elmet (and what critics conclude from it) becomes quite problematic when his words are taken as an ‘authentic’, representative, or comprehensive account of the Calder valley’s history and geography. 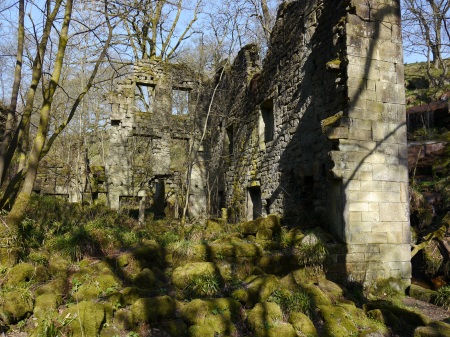 The end of an era?

In The Bioregional Economy Molly Scott-Cato argues that in order to reverse the Great Transformation (described by Polanyi) that severed our ancestral connections with the land, we (in the over-developed West) need to look at what happened where the Industrial Revolution first took hold.  An important key to understanding this can be found in Max Weber’s analysis of the relationship between the Puritan ‘protestant ethic’ and capitalism, and the resulting disenchantment of the world that removed magic from everyday life.(5)  In his introduction to Elmet, Ted Hughes notes that ‘the men who built the chapels were the same who were building the mills’.  He dates the collapse of the ‘local regimes (and combined operation) of Industry and Religion’ to the 1930’s.  In Remains of Elmet  he writes ‘throughout my lifetime, since 1930, I have watched the mills of the region and their attendant chapels die.  Within the last fifteen years the end has come. They are now virtually dead, and the population of the valley and the hillsides, rooted for so long, is changing rapidly.’

The 1970’s was certainly a moment of change in the valley, though population decline had been going on since the First World War (the population of Todmorden, for instance, was about 26,000 just before that war, 21,210 in 1935, 16,000 in 1967, and is now about 15,500).  Ted Hughes personifies the emotional tone of this period in the Valley’s history very effectively through the figures of his parents and his uncle Walt.  His map of the upper Calder valley is, however, not surprisingly, Hebden Bridge centric.  In Hebden the loss of industry (mainly fustian manufacture and clothing) was particularly marked.  Planners in the 1970’s encouraged gentrification, and the town is now a commuter and tourist centre specialising in arts and media, though it still has thriving alternative communities.  Elsewhere in the valley, however, the notion that factories disappeared in the 1970’s is misleading.  Although traditional textile industries were replaced by other activities, three decades after Remains was published the level of manufacturing employment in the Upper Calder Valley is still far higher than the national average.(6)

As a postgraduate geographer in the mid-seventies I asked a photographer, who was a friend of a friend, whether I could put some of his images of valley landscapes on display at the polytechnic where I was working.  He was pleased that someone had taken an interest in his work, and lent me some prints which I duly arranged along a rather bleak corridor.  Martin Parr is now a Magnum photographer, who apparently sells prints for an average of £10,000.  I mention this because the work he was doing at the time, not least his affectionate documentation of the austere culture of nonconformist chapels, with evocative names such as Mount Zion Strict, and Particular Baptist Chapel, at what he too calls ‘the end of an era’, should be of considerable interest to Hughes aficionados.(7)

Ted Hughes, with photographs by Fay Godwin, Remains of Elmet, 1979 and Elmet, 1994, London, Faber and Faber.

5) Molly Scott-Cato, the Bioregional Economy: Land, Liberty, and the Pursuit of Happiness, Routledge/Earthscan 2013.

Footnote 1) The Pennines rise to about 1,500 feet above sea level either side of the upper Calder Valley,and the valley floor at Todmorden is 423 feet above sea level.  Mytholmroyd is about 75 miles from the Humber estuary.  The etymology describes the meeting of two rivers there.  The upper valley is relatively wide at that point, and if anything cast a shadow over Hughes’ childhood home it was the Mount Zion chapel, which he describes as symbolically blocking his view of the Sun and Moon. (See John Billingsley 2007 and Ted Hughes’s The Rock, for his accounts of his childhood perception of the area).  The family moved to a coal mining area of South Yorkshire when Ted was seven.  One Plath biographer writes: ‘Cambridge was cold, but in Yorkshire she would experience England at it’s chilliest ….(and quoting Hughes) the whole Calder Valley had for centuries been considered a desolate wilderness, a hide-out for criminals’.

The above is very much a work in progress.  If you want to leave a comment that shows up below, you need to log in or register with WordPress, or you can e-mail me using the contact form at the bottom of the home page, and say you’d like (some or all of) your comments included here.