Very occasionally a place has touched me in a profound way and left me with an overwhelming sense of peace and wellbeing, or with what I suppose I would have to call a visionary experience.  Moments like this feel fated, and divinatory.  On one occasion we were walking along the side of a glacial valley in Swaledale.  There were patches of late snow on the hillsides.  Pausing by the ruins of an old farmstead, I sat down to look at the view.  As I sat there I began to feel an extraordinary happiness, quite different from the giddy euphoria I usually associate with snowy landscapes.  That feeling was so intense, so rooted, that I became very reluctant to leave the spot.

My formal connections with the Yorkshire Dales are fairly tenuous.  Some recent ancestors on my father’s side were church people in the Ripon area, not far away.  I had very little to do with them, and haven’t researched the genealogy, but that experience, some years ago, made me wonder about ancestry, and the possibility of past lives.

Last week we went up to Wharfedale.  Walks by the river seemed to confirm the redundancy of the term ‘spirit’, at least in relation to the exuberant busyness of the more-than-human ‘natural world’ at this beautifully embodying time of the year.  The place was buzzing with life.  I’ve never seen so many sand martins.  They were zipping about amongst clouds of mayflies, taking food back to their mud-tunnel nest holes to feed rapidly growing youngsters.  Common sandpipers systematically worked the water’s edge.  Dippers hurtled along, engrossed in territorial displays.  Immaculate oystercatchers announced their presence with loud piping calls.  Mandarin drakes flew russet pennants.  Buzzards floated overhead.  Trout hovered motionless in the current -‘like paintings of themselves’, someone said- their mouths breaking the surface every now and again.  Young men leapt from an improbably high outcrop.  All of us revelling in the surprise of warm sunny weather. 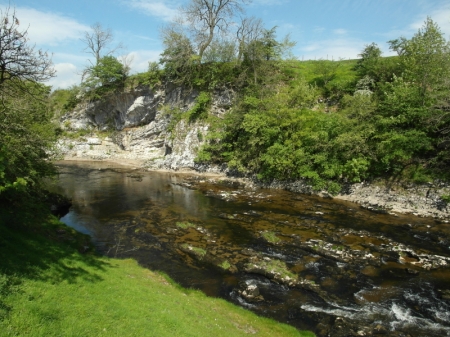 One day we walked up to have a look at the ancient field systems near Grassington.  At places like this the depth of human habitation in this landscape is palpable.  Beneath long parallel medieval dry stone walls, which are about six feet high, an intricate pattern of small prehistoric field boundaries radiates around a Bronze Age burial cairn.  In the same area there’s also the site of a former medieval village, a beautiful walk-through cave -more a rock shelter really- in which animal bones and a single, possibly Iron Age, burial, have been found, and a Brigantian hill top fort.

And, of course, wild flowers in profusion.  The limestone scar around the cave was a mass of colour.  We found shining and cut leaf cranesbill, rock rose, stitchwort, crosswort. speedwell, forget-me-knot, gromwell, biting and English stonecrop, wood sage, sweet cicely, and lots of hawthorn blossom.  Nearby there were also bluebells (deep indigo carpets in the wood – which was also home to swathes of lily-of-the-valley, and clusters of cowslips and primroses ), cow parsley (everywhere along the lanes), nettles, and lady’s mantle.

Not surprisingly, I came away from that day’s walk elated, and with a sense that it was not just ‘me’ -that for some ‘people’, some of the time, at least, this had been a happy place.  Once again a very particular ‘glow’ that seemed to have come from a specific locality, accompanied me for the rest of the day.  Had I met some benevolent genius loci, some guardian of the hillside?  I don’t know.

However, not least because Wharfedale has a long and significant industrial history, this place (as a whole) hasn’t always been a haven of peace.  On the way up towards Grassington Moor the local curlews struck up a raucous chorus of alarm and circled us, tilting their heads to check our intentions.  They must have had nests near the track.  The same thing happened at Mossy Moor, which was teeming with ground nesting birds.

The atmosphere at the top of Hebden Gill and round to Yarnbury was very different.  I didn’t get round the whole area, but the sense of post-industrial desecration was familiar to me from similar scenes where coal has been mined not far from where I live.  It looked as though those in charge had taken what they wanted and left buldings to crumble and spoil heaps to pollute.  If trauma happened here -and, in various ways, it surely did- its memory has become entangled in the complexities and machinations of power, much as happens with memories of personal abuse.  There are dry historical summaries, a small museum with a few artefacts, and a lead mining trail promoted as an ‘interesting day out’.

Lead was being exported from the Pennines by the Brigantes.  The Romans sent their prisoners of war to the lead mines on nearby Greenhow hill.  Eventually the Yorkshire Pennine lead-zinc-flourite orefield produced some 1 million tonnes of lead concentrates, and lesser amounts of associated minerals.(1)  Production above Grassington declined from the late nineteenth century, and with it an entire culture and vocabulary disappeared into the archives, and ultimately tourist brochures.  Words such as bales, ore-hearths, meer stones, gin shafts, hushes, bouse teems, buddles, crushers, dressing areas, knocking floors, coes, leats, and adits, no longer have functioning referents.

The ‘gleaming, white and deadly’ lead, once eagerly sought for its practical versatility, has left a legacy of human suffering and environmental damage.  The harm it does to the nervous, digestive, and reproductive systems, and calcium metabolism of the human body – especially to the neurological development of children- is all too familiar.  An account of the 1851 census for Swaledale shows that the lead mines there employed more than three times as many children under the age of 15 as men over 60.  The Kinnaird commision of 1864 found that the average age of death for lead miners and smelters was 46.67 years, compared with 60.79 for those in other occupations.(3)  If ‘I’, in some past life, or some contented ancestor of mine, once lived in Swaledale, it was surely not as a lead miner!  Conditions in the mines, where poorly ventilated seams were opened up by gunpowder and worked by the light of home made candles, were clearly not conducive to a long and happy life.  No wonder they pegged lucky stones (ones with a natural hole) to the wall by mine entrances, or carried small ones on pieces of string.

Geomorphologists have recently shown that much of the immediate floodplain of the Swale still has either ‘a high probability’ or ‘a likelihood’ of being contaminated by lead, and that ‘a substantial proportion of the metals [mined] have been incorporated into alluvial deposits’ and ‘will continue to act as a major secondary source of metal contaminants over many hundreds of years’.(4)  It wouldn’t be a good idea to eat the trout then!  Back at Grassington you don’t have to be Frederick Engels to notice that this is a landscape shaped by social class.  During four centuries for which records are available, only three families owned mineral rights on the Grassington Liberty.(5)  Higher up on the moor, the aristocracy have enjoyed Grouse shooting for some 250 years.  Risking draconian penalties, local miners ‘had a reputation’ as poachers.

Grouse shooting has long been associated with the persecution of birds of prey.  An ecological study of the breeding success of Peregrine Falcons, published ten years ago concluded “the breeding data show that there is significant variation in Peregrine breeding success between nest sites, with those in areas managed for grouse shooting resulting in markedly fewer fledged young than sites away from grouse moors, on average. This difference is statistically significant and cannot be explained by any natural factors.”(6)

The above suggests that listening to voices that speak from, and especially ‘for’, a particular place, is by no means a simple matter, that ‘otherworlds’ might be as complicated and politically fraught as this one.  I suspect that most animists would agree that we need to understand the ‘political’ as well as ‘deep’ ecology of the places that we love.  One of the legacies of growing up in a culture that marginalises both earth-centred ‘spirituality’ and critical political analysis, is that I sometimes feel as though these two kinds of knowledge and practice come from completely different parts of me.  That’s why friends who understand why they’re intimately connected are so important.

(3) J.L,.Barker, The Lead Miners of Swaledale and Arkengarthdale in 1851.  Memoirs, Northern Caverns and Mines Research Society, Vol2. No2 pp89-97.

(4) M.G.Mackin, et al A Geomorphological Approach to the Management of Rivers Contaminated by Metal Mining, Geomorphology 79, 2006 pp423-444. and The Significance of Pollution from Historic Metal Mining in the Pennine Orefields in River Sediment Contaminant Fluxes to the North Sea, Science of the Total Environment, vols 194-5, 291-397, feb 1997.

(5) M.C.Gill, The Grassington Mines, British Mines No 46, A monograph of the Northern Mines Reserch Society, Keighley, May 1993.

5 thoughts on “Spirits of Place? Animism as Deep Political Ecology.”